A Look at Some Previous Work

The following are some sites I worked on a long time ago and the content is carried over from a previous version of this site. Most of the work is no longer online, so there are some screenshots. It’s pretty crazy to see how different my skills are now.

The map on the home page is made on top of Drupal, as this whole site is, specifically with the OpenLayers contributed module, which is one of my main open source projects. The tile sets are made with TileMill and public data.

The goal of the map is to provide a portal into this site, which is a look into my life, with a location focus. This allows people to have a more instance connection with content, as most people will see themselves relative to the content (at least I hope). On the flip side, there is plenty of content that can’t necessarily be reflected on map in an effective way. 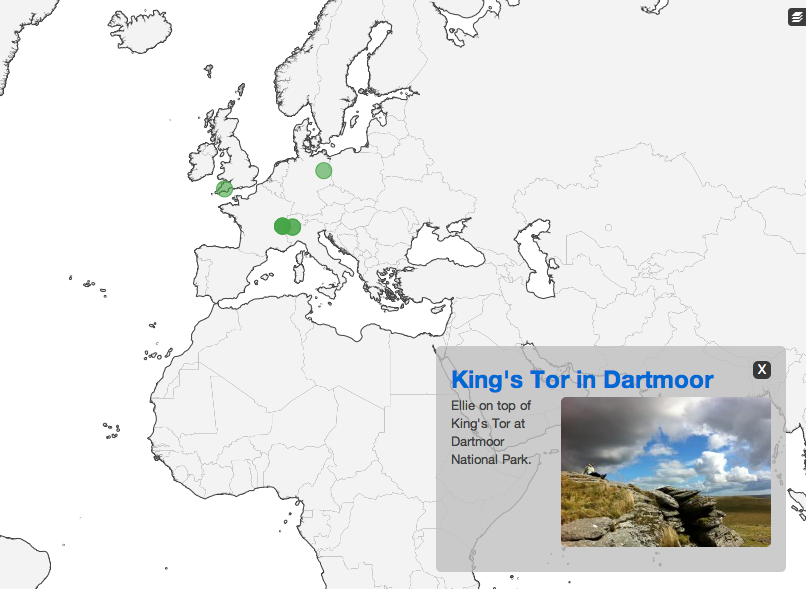 Sumunar is an Indonesian Music and Dance organization that puts on performances and teaches classes. They needed a site that could help connect their existing community, as well as attract new people to the organization.

I used Drupal to aggregate their events, classes, and other content together in a meaningful and concise way. I also utilized some access modules to create an access structure for their content and classes. 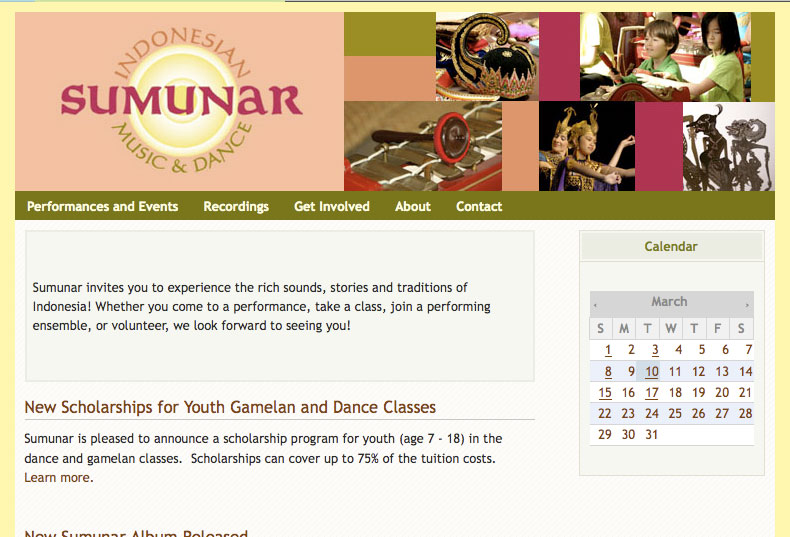 Water: Catalyst of Life and Strife (A Threat to Security or a Vital Opportunity for Cooperation) was a Symposium on April 04, 2008 put on by Hamline Law students. It was an amazing event that created discussions that had not been looked at before.

Since I feel this area is extremely important and this event was one of the first of it s kind, I decided to offere my services to create a simple Drupal website. The main feature of this site was being able to see the schedule of session and presenters. This site is no longer up. 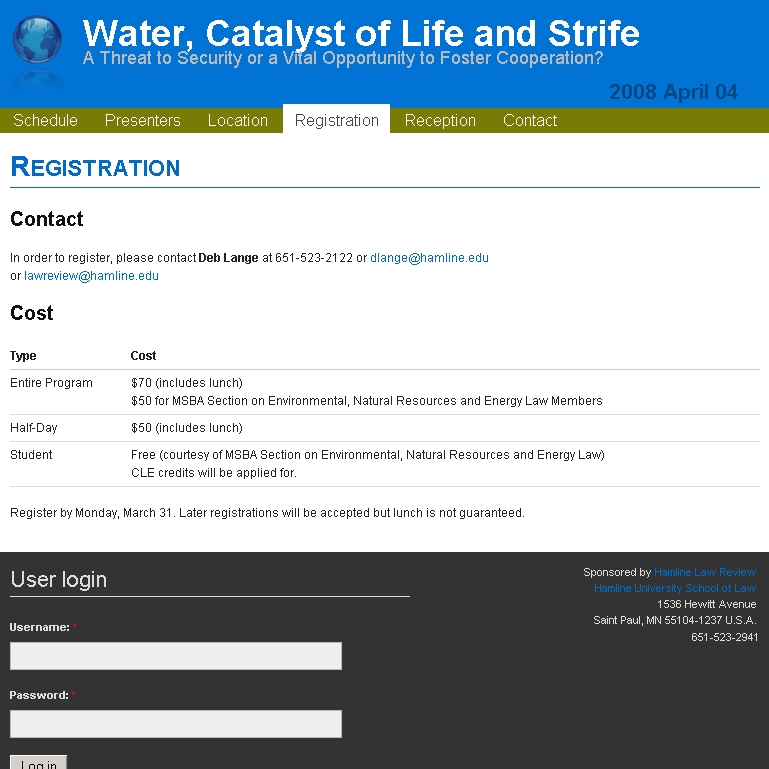 Red Hot Art is a yearly festival in Minneapolis, MN in the Stevens Square Park. It is a great event that brings together all types of local artists and musicians.

This is my second year doing this site in Drupal. Last year’s site was very basic and the main goal was for the main organizer to be able to control some of the content herself.

This year, I have focused on creating a site that has more specific pieces and more streamlined content flows so that managing content is easier for the staff. The main feature that I added was Artist Vendor Application process. This is actually just the default Drupal user registration process with the Content Profile module to add fields into the registration form. So, basically, Artists Vendors are applying for a site account. 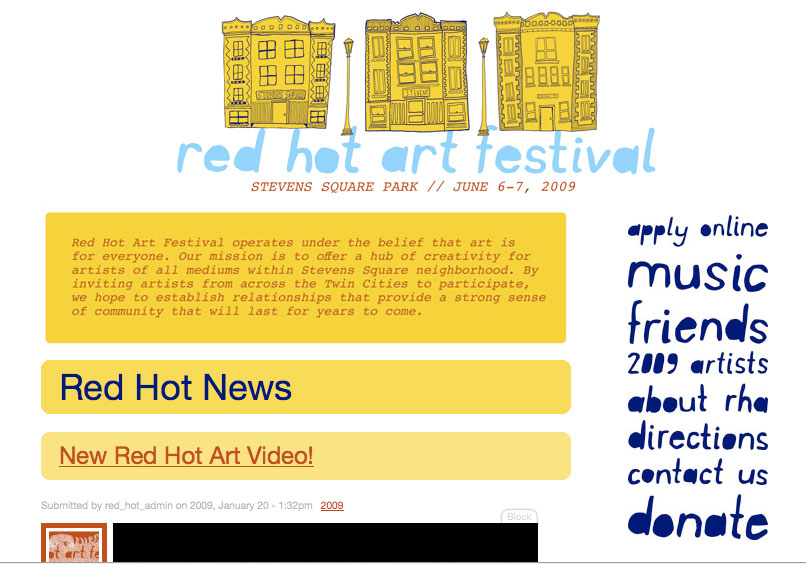 I got involved with the Art Shanties through ExCo. I had always really enjoyed the Art Shanties, and from the first time I went a few years ago, have wanted to take part in this amazing project.

I helped with a lot of the activities, such as construction, events, organization, and photography. But my main contribution was the Map Shanty website.

Of course, it is built with Drupal.

The original purpose of the site was to be a collaborative tool for our group to use to help facilitate communication and organization in a transparent manner. Since we had some major themes each weekend, as well as coordinating the building effort, I decided to go with Organic Groups module, with the help of Notifications and Messaging, which were all in development of that time. As the site came together, these modules became stable.

Even though it was meant to be a collaborative tool, I really wanted people to be able to come to the site and learn who we were and what we were doing. This meant utilizing the Content Profile module.

There was obviously a need to have some mapping on the site as well. Gmap and Location were also in development, but became stable as the site progressed. We actually got coordinates for each shanty and I created icons and created a Gmap of all the shanties. I was also able to flesh out my Gmap Field module with this project.

As it the time came to put the shanty on ice, we decided to make the site more focused for the visitors of the Art Shanties. This meant utilizing ImageCache and Lightbox 2 to create some more visual excitement for the front page. I also created some panaromics using the great, open-source Hugin program.

This project also led me to start using Drush, which is simple amazing. It really saves a lot of time on installing and updating modules. I think for my personal projects, its perfect, but have some reservations about using it at a company or organization that has its own code versioning.

I even got some recognition in the Star Tribune, a local paper, as a Web Gem. 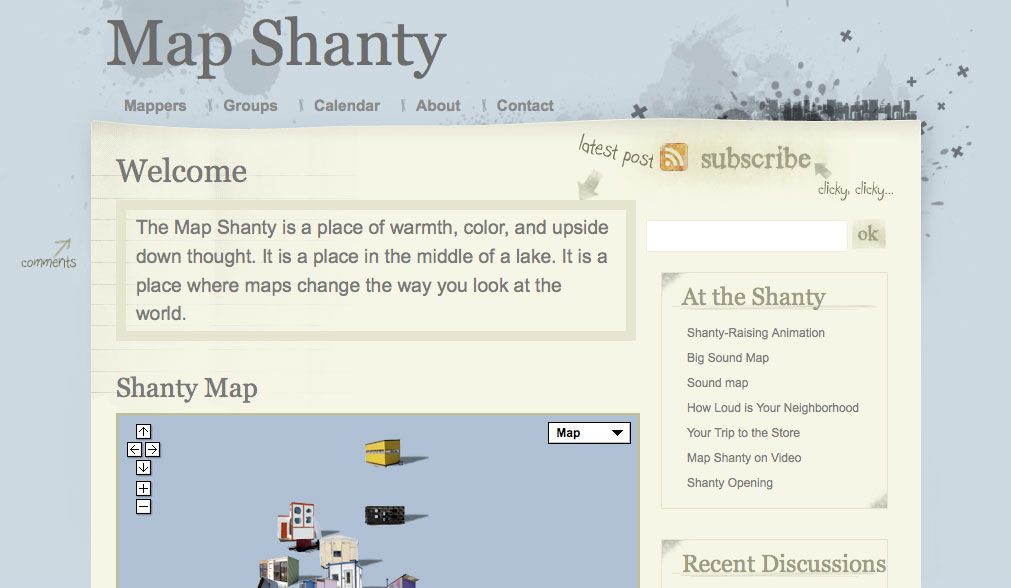 Drupal Daze was a two-day Drupal event I helped coordinate with a couple other people from Twin Cities Open Circuit. It was an amazing event that brought together lots of Drupal experience and knowledge from the Twin Cities metro area.

This was also my first Drupal 6 site. It was still when Views and CCK were in heavy development. It seemed like a good opportunity to try out things I would not use on some other production site. 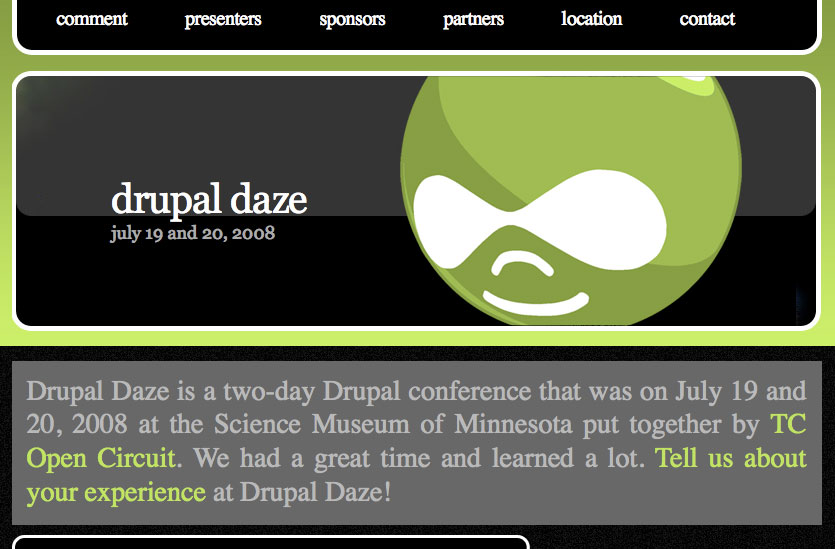